Here at PowerMurt we are always on the lookout for new and useful tools to help make your lives easier, and while the Dewalt 1000W power inverter might not be new, it's a great product and we wanted to dive into its details a bit more. It's an affordable and solid quality option at the 1000 watt level from the renowned DeWalt brand.

Please note, as an Amazon Affiliate we may earn commissions from qualified purchases -- thanks for your support!

Because there are so many different power inverters in the world today it can be difficult to find the time to write full reviews for all of them which is why we like to stick to either brand guides or shorter reviews on multiple products. The Dewalt 1000W power inverter is one of those exceptions to the rule where the quality of the product makes it worth it in our eyes to give you a full rundown of our experience with this power inverter.

Over the course of this review I will give you my experience with the Dewalt power inverter 1000W, from ordering it, to setting it up, to testing it out with a number of different appliances. I hope you enjoy!

If you are like most people these days you have been ordering items online for years and years so I will keep this section relatively brief. Ordering the Dewalt 1000W power inverter was extremely easy and I don’t think that anyone would have trouble with it. After placing my order (this was around 1.5 years ago), I then waited a few days for free shipping and anticipated receiving my new power inverter. 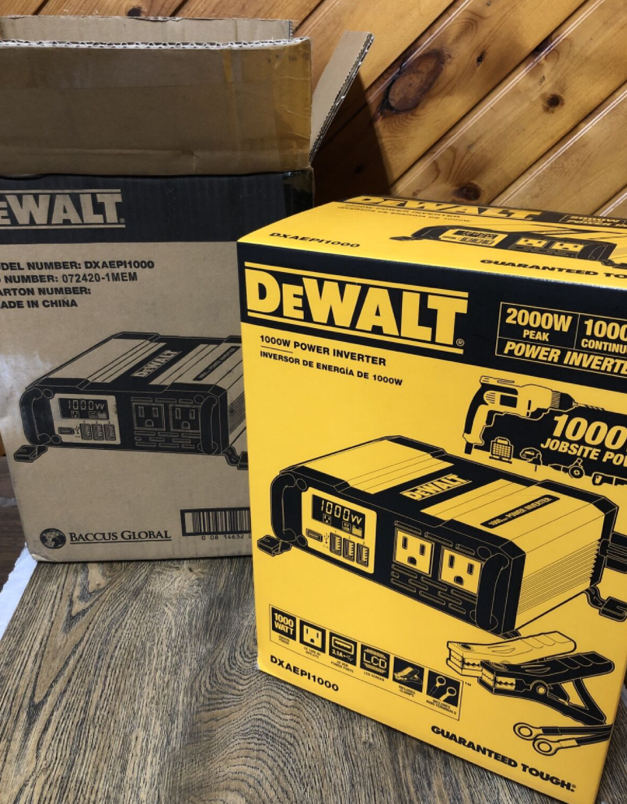 Four days after I placed my order the Dewalt Power Inverter 1000W arrived in the mail, packaged delicately in a small cardboard box. Upon opening and inspecting the Dewalt 1000W power inverter I noticed nothing out of the ordinary and I am pleased to say that there were no visible scratches, dents or missing paint. Obviously the performance of a power inverter is far more important than its appearance, however in my time ordering items online I have found that appearance is a huge indicator of performance. The companies that take the time to properly pack and ship their products have, in my experience, been the companies whose products are superior, and who’s products I can trust to keep performing time in and time out. I have used Dewalt products for many years and they have never disappointed me in their high quality shipping. Now on to the performance of the Dewalt 1000W power inverter.

If you have read any of our other reviews here at Powermurt, like the recent Samlex Evolution review that I wrote you’ll know that the first thing that I like to do with my power inverters before I take them on a trip with me is to test them up to their near max output. I did this with the Dewalt power inverter 1000W as well because I like to make sure that what I have with me will hold up when I take it out on the road, on a trip, or on my boat. I would recommend that everyone test their power inverters at home before they commit to taking with them on a trip so that you are sure what you have in your truck will work when you need it most. 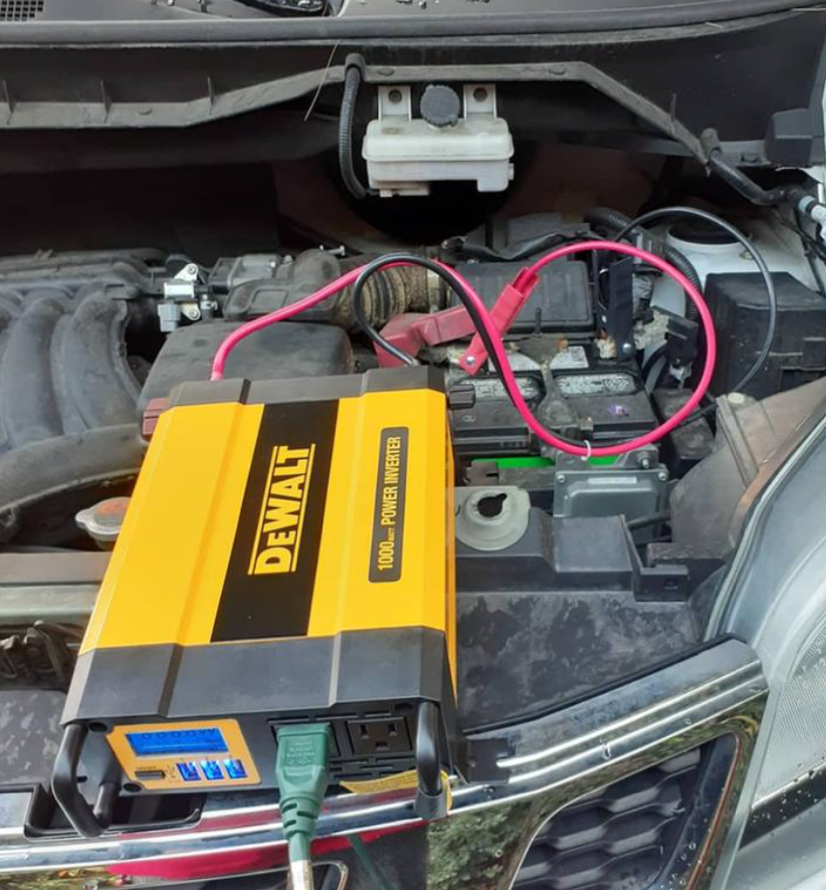 I next decided it would be smart to test the full wattage of my power inverter because when I take it on the road I will be using enough appliances to consistently pull 1000 watts from it. To do this I tested the Dewalt 1000W power inverter with my 1000 watt microwave, using it for 1 hour over the course of ten different 6 minute segments. My microwave was powered up for the full 6 minutes every time and the power inverter hardly even heated up (though to be fair it was in the shade during a rather chilly day).

Overall, my experience using the Dewalt 1000W power inverter was an excellent one. Of course there are some things that I would have liked to have been different, such as longer connection cables and an option to turn off the low power beeping, however in general there is not much to complain about. 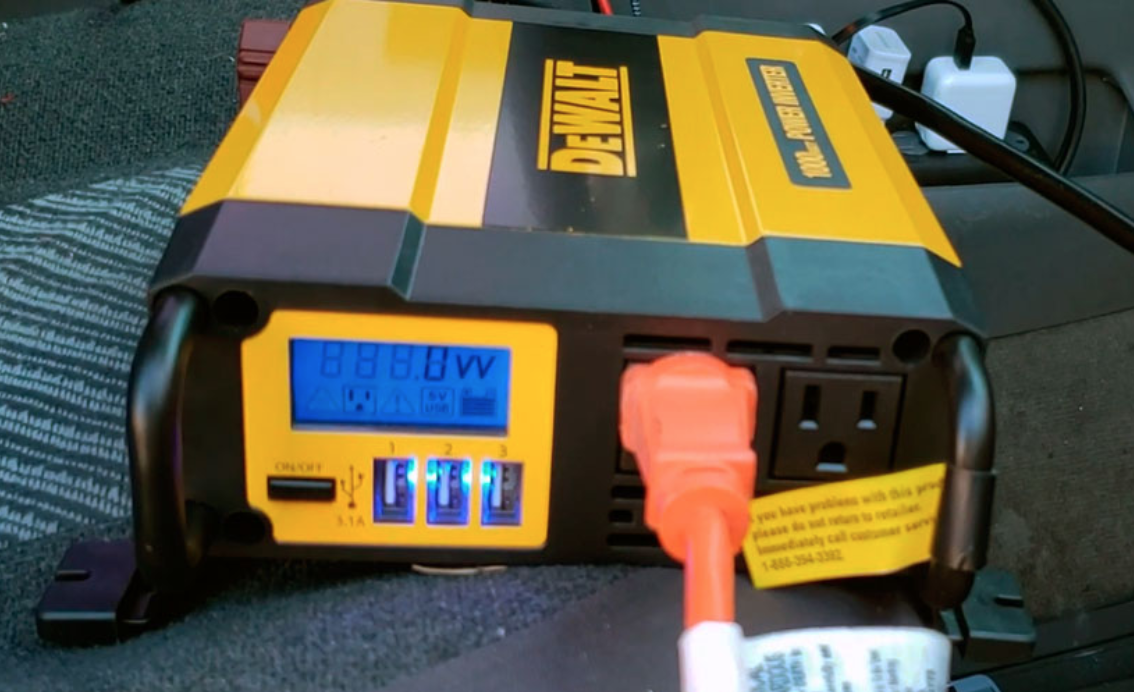 If you have read other reviews about the Dewalt 1000W power inverter you may have seen people complaining about the performance of this product. While I cannot personally speak to their experience, I can say that most of the complaints I saw seemed to stem from one issue, users not reading the products operating manual. One of the great things about this power inverter is that it has different connection possibilities, alligator clips to go directly to your cars battery, and a cigarette lighter adapter. In the user manual you will see that if you using the cigarette lighter adapter you will only be able to receive up to 240 watts of power. This is clearly far below the advertised 1000 watt however it is due to the adapter, not the power inverter.

If you need only 240 watts of power the cigarette lighter adapter is perfect for easy access in the cab of your truck or semi-truck however, to get the full 1000 watts you will need to connect directly to your cars battery. People have complained numerous times about this issue, but in teams testing we have zero issues. We believe that the vast majority of problems that people encountered were due to user error rather than product failure.

Overall the Dewalt 1000W power inverter is a high quality, and reasonably priced power inverter that will perform as well, if not better than expected if used properly. Like all technology if this product is used in the wrong way it will not perform as expected and you may run into difficulties, however if you follow the owner’s manual you should have no issues. We would recommend this product to anyone looking for a compact but decently high powered inverter for use during short camping trips, or as a work inverter to power tools and other appliances. I hoped you enjoyed learning about the Dewalt 1000W power inverter, please leave a comment down below if you have a suggestion on what we should write about next!